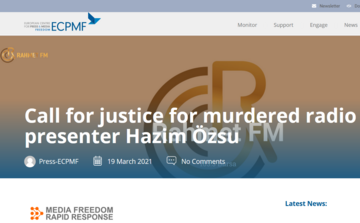 In the evening of 9th March, radio presenter Hazım Özsu was killed by a person who came to his house in Altınova Neighborhood in Osmangazi district. According to local media reports, the suspected killer was a long-term listener and had previously called the radio station to make complaints and demand corrections about its content.

On the day he was killed, Özsu had presented a programme with religious content on the Rahmet FM radio channel. After the suspect was apprehended, he reportedly said that he killed Özsu because he disliked some of his remarks on the radio.

The Media Freedom Rapid Response (MFRR) calls on the Turkish authorities to ensure a swift and thorough investigation and prosecution that results in the perpetrator being held to account in court.

In this regard, we note with concern the endemic impunity for murders of journalists in Turkey: there has been no or incomplete justice for Hrant Dink, assassinated in Istanbul in 2007; Naji Jerf, gunned down in Gaziantep in 2015; Rohat Aktaş, found dead in Cizre in 2016; or Jamal Khashoggi, murdered in a Saudi consulate in 2018.

Impunity begets more violence and emboldens those seeking to silence journalists. It is high time for the Turkish authorities to take a stand and ensure the perpetrators and masterminds behind killings of journalists and media workers face justice.