Whistleblower protections: a letter to Ukraine 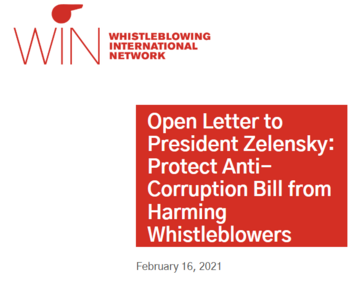 We, the undersigned organisations join our voices to this letter from the Board of Trustees of the Whistleblowing International Network (WIN) to urge your leadership to defend the integrity of the law that protects those who risk their careers to fight corruption and block proposed draft Bill which undermines effective protection for public interest whistleblowing in Ukraine.

In December 2019, Ukraine enacted landmark anti-corruption legislation which included whistleblowing protection provisions which were unsurpassed in their compliance with international best practices principles.
Unfortunately, the Ukrainian Parliament has now adopted amendments in an otherwise positive Bill for reform - Draft Law #3450 - which would effectively remove protection from whistleblowers reporting information within the institutions they are employed. As almost all whistleblowing reports are made initially internally to an employer, these amendments would mean whistleblowers risk being dismissed without legal protection before they can communicate the information to competent public authorities or to the public.
No anti-corruption campaign can be credible or effective without whistleblowing protection.  A whistleblower’s testimony is often the ‘life blood’ for the investigation and prevention of wrongdoing, and for democratic accountability. If the law leaves whistleblowers defenceless when they challenge corruption, it undermines public trust and confidence in the legal framework and policies.  Ukraine is a Member of the Council of Europe and has concluded an Association Agreement with the European Union and included the Euro-Atlantic integration as a value in its Constitution.  As we summarise below, the proposed legislative framework is not consistent with the Council of Europe’s Committee of Ministers’ Recommendation on the protection of whistleblowing, European Court of Human Rights jurisprudence, the recently adopted EU Directive on the protection of persons reporting breaches of Union law, or basic tenets of international best practices principles for whistleblowing protection.

The full letter with the list of signatories can be found here .