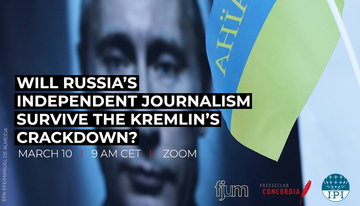 In a single day, two of the last major independent broadcasters – Ekho Moskvy and Dozhd TV – fell silent after having their websites blocked by the state media regulator, which has gone into censorship overdrive in a desperate effort to manage the narrative.

Even the storied Novaya Gazeta – edited by Nobel Peace Prize winner Dmitry Muratov – has said it is removing content about the conflict in Ukraine due to concerns over fears for the criminal prosecution of its journalists. It came as the State Duma passed a law criminalizing “false information” about the country’s armed forces, which could see journalists reporting about alleged war crimes or Russian military losses jailed for up to 15 years, according to the International Press Institute (IPI).

Meanwhile, a dozen other news websites have been blocked and threatened with administrative fines; use of the terms “war” and “invasion” have been banned by the regulator; journalists reporting on anti-war protests across the country have faced arbitrary arrests; and many have fled the country fearing risks to their safety or hefty jail sentences.

Censorship from both sides. These measures have been accompanied by measures taken by EU authorities, such as the ban imposed on two major Russian media outlets; IPI advocacy officer Jamie Wiseman analyzes the risks of these bans for media freedom in an article published by EU Observer .

On Thursday 10 March, at 9 am, a conversation moderated by Mirjana Tomić fjum/Presseclub Concordia and followed by a live Q&A will give voice to independent journalism in Russia.

Here the link to the registration form .