Against SLAPPs, the first European conference

The first European conference for the fight against SLAPPs, also known as gag or reckless complaints, was held in Strasbourg on 20 October, organised by the European Center for Press and Media Freedom and the Coalition against SLAPP in Europe. The report of the event 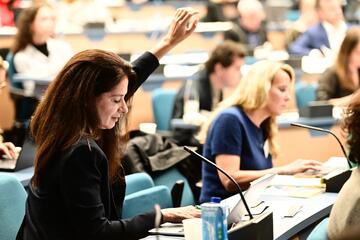 On October 20, the first European conference dedicated to the fight against SLAPPs (Strategic Lawsuits Against Public Participation), also known as gag complaints or reckless complaints, was held in Strasbourg. The conference was organised by the European Centre for Press and Media Freedom (ECPMF) and the Coalition Against SLAPPs in Europe (CASE).

Through its five panels, the meeting allowed to bring together the different stakeholders active in the anti-SLAPP community and to establish a dialogue between the representatives of the European and national institutions, the representatives of civil society organisations, and the activists and journalists affected by SLAPPs. The aim of the conference, as illustrated by Lutz Kinkel, director of ECPMF, was to present a comprehensive overview of what has been done in the area of anti-SLAPP activism so far, and what remains to be done in the near future. The conference was a forum designed to listen to the testimonies of those journalists and activists threatened by SLAPPs, but also to take note of the European anti-SLAPP initiatives and celebrate the successes achieved in the field of anti-SLAPP activism.

As is known, the European anti-SLAPP community was formed in response to the tragic murder of Daphne Caruana Galizia, a Maltese investigative journalist who was killed in a bomb attack in October 2017. Her son Matthew Caruana Galizia, director of the Foundation dedicated to her, recalled the difficulties faced by Daphne Caruana Galizia in the months preceding her assassination and the dramatic context in which he and his family were forced to operate after Daphne's death:

“My mother died without access to her own money, her bank accounts were frozen by a cabinet minister as part of proceeding in a defamation case that he filed against her. With the financial support of Free Press Unlimited we were able to fight off no less that 46 defamation cases that my family inherited after my mother’s murder. Literally before we were able to bury what was left of my mother my family and I were in court defending ourselves against the defamation cases that we were inherited just a few days after the murder itself. We have been able to reduce these cases to fewer than 10, but as I said it has been very hard, or one, and then we were able thanks to the financial support from Free Press Unlimited and ECPMF”.

As anticipated by the reflections of Matthew Caruana Galizia, it was the tragic end of the Maltese journalist and the experience of her family that stemmed the constitution of CASE, a coalition that gathers about ninety non-governmental organisations around the shared objective of protecting the rights of all those who are affected by SLAPPs in the exercise of public participation.

The joint effort of representatives of civil society organisations, the European Parliament, the European Commission allowed the formulation of a proposal for a directive and a recommendation, both made public on 27 April. Vice President of the European Commssion Vera Jourova and President of the European Parliament Roberta Metsola spoke on behalf of the European institutions. The latter voiced the growing concern raised by the chilling effect generated by SLAPPs and the threat of recourse to SLAPPs, which has been "slowly chipping away our fundamental pillar of our democracy". Such a threat requires the introduction of a solid European support system for those who are targeted by SLAPPs. Roberta Metsola stressed the political commitment of the institution she leads: "The European Parliament has the responsibility and the privilege to lead standstill and standfast together in defence of media and press freedom. Because we have long understood that without freedom of media there can be no real freedom. Europe must stand with truth seekers and our values must be protected by our laws”.

Similarly, the Council of Europe is expected to adopt a Council Recommendation on SLAPPs in the course of 2023. Although not binding, the value added of this instrument will be that of addressing states outside the EU, but which are part of the Council of Europe. As recalled by the Secretary General of the Council of Europe Marija Pejcinovic Buric: “SLAPPs have many targets: authors, academics, bloggers, anti-corruption groups, civil society organisations, and human rights defenders. The list goes on. But journalists and media workers are at the top. This profession plays a vital role as a public watchdog proving citizens with news, information, and ideas".

To highlight how media professionals are not the only category affected by SLAPPs, the speech by Dunja Mijatovic recalled how activists involved in environmental protection are increasingly becoming targets of SLAPPs, as demonstrated by the recent case of two young environmentalists in Bosnia and Herzegovina who are facing a series of legal actions instigated by a Belgian company that owns a hydroelectric power station on the Kasindolska River.

After all, to confirm that it is not only the journalists of the main newspapers who have to deal with reckless complaints, during the day space was given to voices from the world of environmental activism – such as director of Bruno Manser Fond Lukas Straumann and legal manager of Press Club Concordia Walter Strobl – and the academic world, as in the case of the speech by Dirk Voorhoof, professor at the University of Ghent. Furthermore, along with speeches by the representatives of well-established newspapers such as The Guardian and EU Observer, the organizers also gave the floor to journalists who work in geographical contexts considered far from Brussels, as in the case of Piotr Stasinski, editor-in-chief of Gazeta Wyborcza and testimonies closely linked to local territories, as in the case presented by Julia Nebel, director of Luhze e.V., a small newspaper run by university students in Leipzig.

Considerable space was given to reflections on advocacy, including both the organisations operating in Brussels and Strasbourg and those operating on the field in member states. While the choice of the case studies presented was dictated by the agendas of the three states whose governments are actively discussing anti-SLAPP legislative proposals – the United Kingdom, Ireland, and Malta – another representative of the family of Daphne Caruana Galizia offered an unrivalled advocacy model. Corinne Vella, sister of Daphne and media relations officer for the Daphne Caruana Galizia Foundation, thus answered a tepid speech by Maltese MP Naomi Cachia:

“For the first time ever somebody from your governing party has actually mentioned Daphne by name in a public forum, while she was discredited for so many years and that was one of the circumstances that led to her murder. And this is [the reason] why we have this Europe-led campaign. I would like to point out that some of your party colleagues continue to sue her five years after her death. The anti-SLAPP legislation which has been tabled without consultations is far short of the minimum standards specified by the EU package of measures which has been announced in April. We do not need to wait for a directive to tell us what to do, we already know what needs to be done, as the multiple reports and advice that Malta has received has not been taken onboard, least of all in the proposed legislation which does not protect human rights defenders. They do not even get a mention. That legislation is far below what we need. And we do not need to wait any longer to have proper legislation that actually does provide protection and that is the minimum we should expect in these circumstances”.

Directive
The proposal    for a directive drawn up by the European Commission examined by the EU Parliament and the EU Council, currently under discussion in the relevant European forums, will conclude its legislative process    by mid-2023. Once approved by these two bodies, it will be binding for all member states, which will have two years to achieve the objectives set out in the directive. The directive aims to establish a minimum common denominator at the level of member states that can determine a harmonised level of protection against SLAPPs. The directive defines SLAPPs as "strategic legal actions aimed at blocking public participation". This definition reflects the Commission's intention to include any citizen active in the exercise of public participation among the individuals affected by SLAPPs. The directive is aimed at regulating civil cases with cross-border implications. The definition of cross-border is intentionally broad so as to cover not only the cases in which the plaintiff and the defendant find themselves residing in two different countries; but also the cases in which the cross-border dimension is dictated by the nature of the public participation act (for example for cases in which a journalist publishes an article about a topic relevant to more than one EU member state or an activist is fighting for an environmental cause that has repercussions in more than one member state).

The EU Commission Recommendation    is not binding, but is aimed at integrating the directive. This encourages member states to align their rules with the proposed EU law also for national cases and in all proceedings, not just civil matters. Through the recommendation, the Commission invites member states to ensure the availability of training courses for legal professionals and potential SLAPP recipients, as well as access to independent pro-bono legal assistance. In addition, it asks member states to collect aggregate SLAPP data and report to the Commission annually, starting in 2023.