The study offers a wide range of online comment management methods adopted by media outlets and companies around the world, pointing out to the best practices for dealing with offensive and unsuitable comment and hate speech. 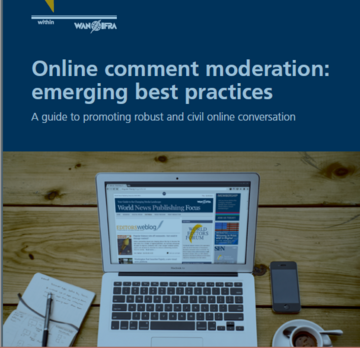 The study published by World Association of Newspapers (Wan-IFRA) is based on interviews conducted with staff of 104 news outlets in 63 countries, plus a selection of experts from the corporates and academic worlds to identify key trends, opportunities and best practices for online comments management. Online comments emerge as one crucial area of communication between media editors and readers. Very few media do not allow online comment at all. Inputs coming from readers’ comments are seen by almost half of the news outlets’ staff interviewed in the study as a valuable resource for better journalism and reader engagement, while the other half accept them as a ‘necessary evil’.

The management of online comments requires time, people and money resources. This is due to the fact that it is impossible to limit commenting to those who have something constructive to say. Discussions frequently descend into torrents of insults and hate speech, which is listed as one of the first reasons for deleting comments.

News outlets adopt different methods to moderate online comment, which they consider very important to be managed properly so as not to damage their brand identity. Another key consideration for news organisations in determining their moderation strategy is how legally liable they are considered for the comments made by users on their site.