Sued Into Silence: How the rich and powerful use legal tactics to shut critics up

A study about SLAPP, strategic lawsuits against public participation, that highlights the situation in Europe, with suggestions and inputs for the future 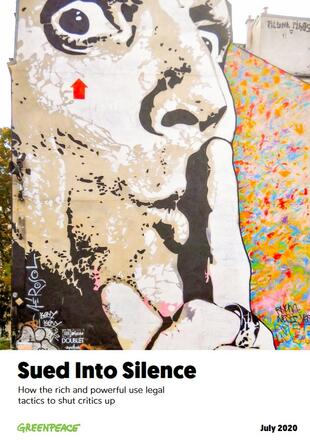 Breaking the silence. A new report on the legal measures that will give journalists back their voices

This report by Greenpeace gives basic definitions of a phenomenon that affects the whole world and focuses on episodes, facts and figures in the European Union.

Across the EU, journalists, activists, academics and their organisations are facing legal threats or fighting lawsuits designed to shut them up. These lawsuits, brought by companies or powerful individuals and designed to silence critics, are called SLAPPs – Strategic Lawsuits Against Public Participation.

While the full extent of the SLAPPs is unknown, it is clear that SLAPPs are a threat to anybody acting as a ‘watchdog’ in society, exposing wrongdoing by powerful businesses and individuals. The result is a tangible limitation of the EU’s fundamental rights to freedom of expression and information, and the right to protest.

As the report confirms, "the objective of SLAPPs is not to bring justice, but rather to impose a burden on critical voices".

The first part focuses on definitions and deals with disproportionate claims for damages, disparity of power and resources, attacks on free speech, SLAPP as a specialised business and forum shopping, while the second part focuses on Europe, where the issue was raised after the murder of investigative journalist Daphne Caruana-Galizia in Malta.

A third chapter outlines the features of the actors involved, who is affected, who brings the threats, and tries to picture the way forward.