Throughout this article, Ronan Ó Fathaigh and Dirk Voorhoof, both legal scholars with expertise in freedom of expression, examine the decision of the General Court of the Court of Justice of the European Union in the case RT France v. Council 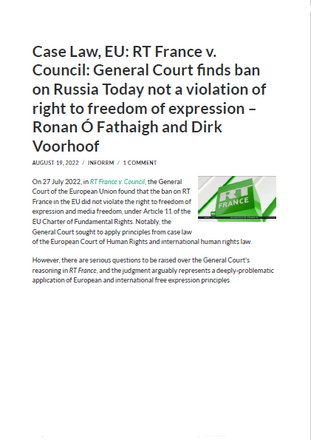 In early March 2022, RT France lodged an appeal to the General Court challenging the decision of the Council of the EU which had banished RT production across EU members. A few days earlier, by adopting a Decision and a Regulation, the Council had employed a double legislative tool aiming at banning RT France broadcasting in response to the Russian invasion of Ukraine.

In July 2022, the ruling of the Court argued that the ban imposed on RT France did not violate the right to freedom of expression and media freedom of the EU Charter of Fundamental Rights.

By analysing the ruling of the General Court, Ronan Ó Fathaigh and Dirk Voorhoof draw attention to a number of critical reasonings which they identified as challenging the freedom of expression and information:

The authors finally condemn in the strongest way the military aggression by the Russian State against Ukraine. Their comments should not be interpreted as giving any support to the Russian state media concerned. The concerns expressed in their blog focus on the one-sided approach, and arguably flawed application, by the General Court of the right to freedom of expression, and its selective application of ECtHR case law on Article 10 ECHR.