As evidenced by the latest report by Reporters Without Borders, press freedom in Greece today is in great pain. A situation that also has its roots in the unresolved regulatory framework. By Mary Drosopoulos 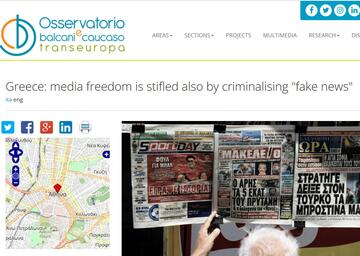 When, during a press conference in November 2021, a foreign journalist called upon Greek Prime Minister Kyriakos Mitsotakis to ‘stop lying about harsh, brutal pushbacks’ and‘not to insult the intelligence of all the journalists in the world’, everyone present stood speechless.

That was an unprecedented event: it is extremely rare in Greece to see journalists publicly address such direct questions to a high government official, let alone in a fiery and imperative tone of voice. Before labelling the journalists’ accusations as a collective insult against Greek people, the Greek PM pointed out the journalist’s nationality, ‘I understand that in the Netherlands there is a culture of asking direct questions to politicians’, implying that this practice is alien to the Greek cultural norm. A few days after the incident and amid a defamation campaign on the social media portraying her as a ‘spy’, the Dutch journalist left Greece, citing threats against her life and even a physical attack.

This controversial incident is one of the many that have been reported during the last years in Greece, adding to the existing evidence of an asphyxiating social pressure exercised against investigative reporters and whistleblowers. The annual World Press Freedom Index released in early March 2022 classifies Greece as the lowest-ranked EU member for press freedom. The findings illustrated reiterate many of the problems identified in the Media Freedom Rapid Response (MFRR) report published a couple of months earlier, including the rising cases of SLAPP lawsuits targeting journalists, evidence of manipulation of the local media by powerful oligarchs affiliated with the ruling party, and public intimidation of reporters challenging the dominant narrative promoted by the state.

The full analysis is published by OBCT both in English and in Italian.