A legal opinion commissioned by the European Centre for Press and Media Freedom (ECPMF) finds that the Hungarian Government’s response to the COVID-19 pandemic fails to live up to domestic or European legal standards and entrenches the country’s attacks on independent media outlets, journalists and media workers 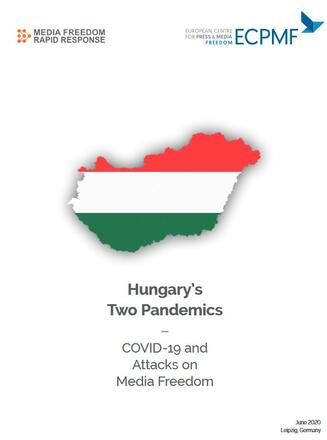 This legal opinion, authored by Dr. Polyák Gábor, Mertek Media Monitor (CMDS) highlights the changes brought forward by the Hungarian Government and a number of issues related to potential violations of Hungarian Basic Law. These include the ability to sidestep parliament, by not affording them the opportunity to approve or question any extension to decrees passed during the Special Legal Order, and using vague definitions found in pre-existing disaster management legislation to extend the Government’s powers during the pandemic. Further to this, amending the crime of scaremongering, while bypassing existing legislation that can target malicious communications, increases confusion about the laws that target free expression and reduces the space within which media outlets, journalists, media workers and civil society can express themselves free from the risk of state action.

In March 2020, the Hungarian Government proclaimed a State of Danger, passed a number of decrees and adopted a new bill; the Authorisation Act, in its response to the COVID-19 pandemic. The Authorisation Act gave the Government enhanced powers to rule by decree, enabling it to bring forward, amend or withdraw legislation and amend the Hungarian Criminal Code to expand the definition of the crime of “Scaremongering”. Due to the ruling party coalition’s two-thirds majority in Parliament, these changes were swiftly adopted and implemented.

In June 2020 the Hungarian Government has repealed the State of Danger. However, it is unclear whether this repeal will cover all changes made and what mechanisms will be in place to identify and address the short- and long-term impact of these amendments on media freedom.