Recommendation on the protection, safety and empowerment of journalists

The Recommendation, published on 16 September 2021, is part of the Commission's work to support media freedom and pluralism in the EU 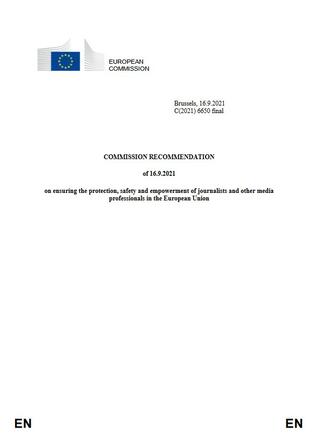 The EU is considered one of the safest places for journalists. Yet, the number of threats and attacks against them has increased in past years, with the most tragic cases being assassinations of journalists. Intimidation and pressure are damaging the environment in which journalists work. Europe needs to better protect journalists.

Adopted in September 2021, the Recommendation on the protection, safety and empowerment of journalists will help strengthen media freedom and media pluralism in the EU. It aims to ensure safer working conditions for all media professionals, free from fear and intimidation, whether online or offline. It sets out concrete actions for Member States to take, with a particular attention to female journalists.

The Recommendation sets out recommendations, including ones focused on protests and demonstrations; online safety and digital empowerment; female journalists and journalists belonging to minority groups.

With an increasing number of attacks on journalists, more than 900 attacks in the EU in 2020, the Recommendation calls on Member States to vigorously investigate and prosecute all criminal acts, making full use of existing national and European legislation. Where relevant, Member States are encouraged to involve European authorities, such as Europol and Eurojust. Member States should foster better cooperation between law enforcement and media bodies to identify and address the threats faced by journalists more efficiently, and provide personal protection to journalists whose safety is at risk. It is also crucial that media have non-discriminatory access to information, including press conferences and documents held by public authorities. Furthermore, the Recommendations highlights the importance of training and of strengthening access to social protection for all media professionals.

Nearly one in three incidents occur during demonstrations, making demonstrations the most frequent place where journalists were attacked in 2020. Member States should provide regular training for law enforcement authorities to ensure that journalists and other media professionals are able to work safely and without restrictions during such events. Working together with representatives of journalists is essential to decide on the most appropriate measures, for example when it comes to the visual identification of media professionals. The nomination of liaison officers to inform journalists about potential risks, in advance of planned protests or demonstrations, is also among the recommended measures.

Digital and online safety has become a major concern for journalists due to online incitement to hatred, threats of physical violence, but also cybersecurity risks and illegal surveillance. Member States are encouraged to promote the cooperation between online platforms and organisations with expertise in tackling threats against journalists, for instance by encouraging their potential role as trusted flaggers. Relevant national cybersecurity bodies should, upon request, assist journalists who seek to determine whether their devices or online accounts have been compromised, in obtaining the services of cybersecurity forensic investigators. Member States should also promote a regular dialogue between such cybersecurity bodies, media and industry, in particular in view of fostering cyber-awareness and digital skills among journalists.

4. Women and minority groups journalists and those reporting on equality issues

Female journalists and journalists belonging to minority groups, as well as journalists reporting on equality issues are particularly vulnerable to threats and attacks. Female journalists face more threats than their male counterparts do and 73% declared having experienced online violence in the course of their work. The Recommendation urges Member States to support initiatives aimed at empowering women journalists and professionals belonging to minority groups and those reporting on equality issues. It encourages Member States to improve transparency and effective reporting on attacks and discrimination against these journalists and to provide them with information on how to seek assistance and support. Furthermore, the Recommendation highlights the need to foster equality and inclusion in newsrooms and the media industry as a whole, and to promote the continuous development of competences and skills in all professions relevant for the protection of journalists.