Resolution 2382 (2021) of the Parliamentary Assembly of the Council of Europe: Media freedom, public trust and the people’s right to know

With 111 votes in favor, 4 against and 16 abstensions, the PACE adopted a resolution promoted one year and a half ago by the Italian Roberto Rampi. The motion stated that "today, human rights, democracy and the rule of law are challenged by post-truth narratives, which are unfortunately gaining strength and public support. At the same time, the concentration and lack of transparency of media ownership hamper true media pluralism, and recurrent attempts to manipulate public opinion... 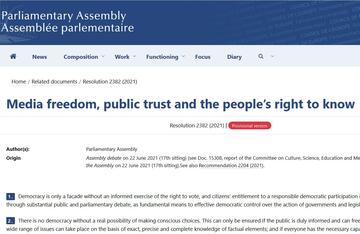 Here the full text of the resolution:

1. Democracy is only a facade without an informed exercise of the right to vote, and citizens’ entitlement to a responsible democratic participation in policy- and decision-making processes through substantial public and parliamentary debate, as fundamental means to effective democratic control over the action of governments and legislators.

2. There is no democracy without a real possibility of making conscious choices. This can only be ensured if the public is duly informed and can freely inform itself; if a real debate of ideas on a wide range of issues can take place on the basis of exact, precise and complete knowledge of factual elements; and if everyone has the necessary capacity and culture to critically analyse the various points of view and can express themselves without fear. Furthermore, these conditions are essential for people’s elected representatives to exercise their mandate effectively and responsibly.

3. Today, our democratic values and the functioning of our democratic institutions are challenged by post-truth narratives, disinformation, narrow agenda-setting powers and recurrent attempts to manipulate public opinion. Furthermore, recent developments have often eroded parliamentary prerogatives and their fundamental mediating role in a democratic society. A growing sense of divide between governing institutions and the general public have increased public distrust, endangering democratic governance and the efficiency in implementing public policy.

4. Therefore, for the Parliamentary Assembly, there is a need to establish a wide right to know, defined as the citizen’s civil and political right to be actively informed of all aspects regarding all stages of the policy-making and administrative/rule-making processes, in order to allow for full democratic participation, and hold public goods administrators to account according to the standards of human rights and the rule of law.

5. Limitations to the right to know, intended to protect national security, the right to privacy or of other human rights, must be narrowly defined.

6. The right to know has three active dimensions for implementation: direct obligations that public authorities, and public or private institutions which exercise public functions, have to respect independently of specific requests; the right for citizens to be notified, be informed, have access to relevant information and contribute to the development and appraisal of laws, regulations, and other policy instruments; and an educational and cultural environment prone to enhancing and stimulating citizens’ continued learning in an informational society.

7. To give full effect to a citizen’s right to know, an ecology of public policy instruments is required, including mechanisms of consultation, notice and comment, impact assessments and ex-post regulatory and legislative evaluation.

8. The entry into force of the Convention on Access to Official Documents (CETS No. 205, the “Tromsø Convention”) is a significant step forward in the right direction, which the Assembly welcomes. Still, it notes with concern that the take up of the Tromsø Convention has been very poor.

9. The media hold a key role in agenda-setting and providing timely, pluralist and reliable information. They must be free from any pressure, including direct verbal and physical attacks, but also legal harassment in the form of strategic lawsuits against public participation (SLAPPs). The assaults against journalists and intimidation of the media are major threats to the people’s right to know. It is therefore crucial that Council of Europe standards on media freedom, editorial independence and pluralism, protection of journalists, funding benchmarks and guarantees, and the transparency of media ownership are fully implemented and adequately monitored.

11. Likewise, access to the information contained in company registers is essential for citizen watchdogs, such as anti-corruption civil society groups, and for investigative journalists to track possible illegal actions. Denying access to data on company ownership and structures, or significantly restraining it, including by prohibitive costs, limits the public’s right to know, and may open the door to corruption, fraud, money-laundering, human rights violations, and other illegal activity.

12. While the right to know aims to enhance meaningful citizen participation in the decision-making process, there needs to be transparency of any participation exercises carried out and of the input from interest groups, including professional lobbyists, business associations and organised civil society.

13. The Assembly is concerned that, in most member States, there are no transparency regimes guaranteeing that civil society, journalists and the public can obtain information about how artificial intelligence is being used and how data feeds into automated decision making. Moreover, the Assembly trusts that ensuring that the wider public has free and easy access to scientific and other scholarly knowledge has significant society benefits.

14. Moreover, the citizen’s right to know is intrinsically linked to free, easy and life-long access to cultural instruments as indispensable tools in the development of a critical and independent understanding of information and of the active, inclusive and conscious participation in a democratic society. Art is a beneficial vehicle for the enhancement of critical thinking capabilities. To this end, the wide-spread presence of cultural avenues such as libraries, theatres, museums and live music, is to be promoted and inclusion of all societal actors in cultural life enhanced.

15. The main role and primary responsibility for safeguarding the right to know lies with the member States and with public authorities. However, other actors, such as public and private media, educational and cultural institutions, come into play and must assume their share of responsibility in educating active and knowledgeable citizens. The actions of the various stakeholders must be coherent and synergistic, hence partnerships between these several actors are crucial.

16. Consequently, the Assembly calls on member States to:

16.1 recognise the right to know as the citizen’s civil and political right to be actively informed of all aspects regarding all stages of the policy-making and administrative/rule-making processes, in order to allow for full democratic participation, and hold public goods administrators to account according to the standards of human rights and the Rule of Law;

16.2 ratify the Tromsø Convention, if they have not yet done so, also committing to optional provisions on legislative and judicial transparency, and to bring their access to information laws into line with the highest convention standards;

16.3 support the rapid establishment of the Tromsø Convention Monitoring Committee and to commit sufficient funds for it to operate effectively;

16.4 promote and participate in Europe-region-wide knowledge exchanges on best practices regarding the implementation of the right of access to information, which could also be of great value for the Tromsø Convention Monitoring Committee;

16.5 develop and implement, in parallel with the consolidation of existing standards set by the Tromsø Convention, complementary measures for the effective safeguard of the right to know in accordance with the principles set out in this resolution and, in particular, to ensure that there is an effective collection, compilation and timely publication of information of public interest, with a transparency by design approach;

16.6 take inspiration from the European Union Non-Financial Reporting Directive 2014/95, so as to make provisions for extending access to information laws to all private bodies performing public functions or operating with public funds, and for ensuring publication by larger companies of specific information in the crucial domains of public interest such as respect for human rights, anti-corruption and bribery, environmental protection, social responsibility, treatment of employees, diversity within company boards in terms of age, gender, educational and professional background;

16.7 adopt legislation which ensures transparency of lobbying, in line with the Recommendation CM/Rec(2017)2 of the Committee of Ministers to member States on the legal regulation of lobbying activities in the context of public decision making;

16.8 co-operate with the Group of States against Corruption (GRECO) and other relevant international actors, as well as with civil society, to develop a legal framework allowing and facilitating access to information contained in company registers, also building on best practices developed by countries that have open company registers;

16.10 establish an independent national monitoring system of the legality, correctness and completeness of information delivered by all national media, and to make the disaggregated data from this monitoring exercise public at least on a monthly basis;

16.11 review funding mechanisms and avoid budget cuts to the media sector, with a view to preserve and enhance an open and pluralistic media landscape, and to fully implement the multiple relevant Council of Europe recommendations on the matter;

16.12 bring their legislation and practice into line with Recommendation CM/Rec(2020)1 of the Committee of Ministers to member States on the human rights impacts of algorithmic systems, and organise debates on transparency of algorithms used by social media companies, bringing together relevant stakeholders, to discuss how to ensure parliamentary and citizen oversight of these algorithms;

16.13 encourage the producers and publishers of knowledge to make their works available free of charge in open formats, and to support good practices on open access, so that research results are more accessible to all societal actors, with a view to delivering better science and innovation data in the public and private sectors;

16.14 create and reinforce instruments for the wide-spread diffusion of cultural knowledge; promote, in this respect, the role of libraries, museums, theatres, live-music avenues and other cultural institutions, and establish a minimum monitored measure for their presence pro capita.

17. Members of parliament have an enhanced right of access to information. Elected officials may be granted access to otherwise confidential information and play a crucial role in mediating public debate between different levels of society and safeguarding minority rights. Therefore, the Assembly calls on the national parliaments to analyse and evaluate the mechanisms of participation in the decision-making process at all levels, including the agenda-setting and allocated times of parliamentary debates and questions, seeking to ensure that the issues of public interest are fully debated and information of public interest enters the public domain.