Media freedom in Croatia: the problem is not the laws, but their application

951 trials against journalists, claims for damages for 10.3 million Euros. Numbers that show how the media world in Croatia is under pressure. We talked about it with Vanja Juric, a lawyer specialising in freedom of expressionby Giovanni Vale 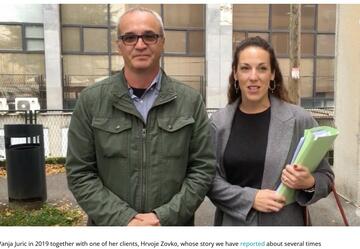 According to the latest report  by the Association of Croatian Journalists (HND/ CJA), at least 951 trials are ongoing in Croatia against journalists and the media. In the vast majority of cases, these are libel proceedings, and in total the damages claimed from reporters and newspapers amount to approximately 10.3 million Euros. Vanja Juric is a Croatian lawyer specialising in freedom of expression and media law. Since 2008, she has defended publishers, journalists, civil society organisations, or activists in many of these trials. We asked her to explain us what is happening in Croatia.

Why are there so many trials against journalists and the media in Croatia?

I think the main reason is that we are a very young democracy and therefore we have not developed an awareness of the importance of media freedom and what freedom of expression really means in a democratic society. People think it is completely normal, usual, and even desirable to sue the media. The figure collected annually by the Association of Journalists of Croatia (HND), which speaks of about a thousand trials in progress against the media and journalists (a figure which is incomplete, as some newsrooms do not respond), is very high compared to the number of inhabitants and compared to what happens in other EU countries.

The rest of the article is available here .