Cybersecurity for Democracy is a research-based effort to expose online threats to our social fabric – and recommend how to counter them. They are part of the Center for Cybersecurity at NYU 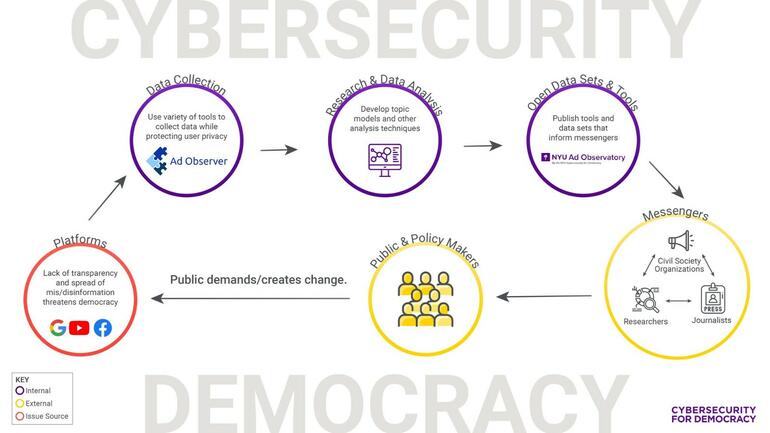 The focus is on systems, revealing the ways that online platforms leave themselves open to mis- and disinformation attacks that mislead users and erode trust.

Social media platforms are vulnerable to social trust attacks that undermine democracy. Before the 2020 U.S. elections, for example, Facebook was flooded with paid ads that spread emotional and false messages about the safety of voting systems. After the election, polling data showed that millions of Americans believed that election fraud had occurred on a massive scale and resulted in the theft of the election. This is just one example of how inaccurate information can be weaponized online and is threatening democracies globally.

The research group uses traditional cybersecurity methods to evaluate vulnerabilities of online platforms that are used to misinformation. Mitigation strategies are then developed to improve online security, working with advocates, policy makers, and platforms.

"We focus on democracy because online platforms–such as Facebook, Twitter, and YouTube–have proven vulnerable to misinformation aimed at weakening democratic norms. There is nothing new about misinformation, dirty tricks, and voter suppression in the history of democracy. But as political campaigns – like much of the rest of public life – have moved online, so have tactics to mislead the public. Solutions must be tuned to the ways platforms work in the real world, with algorithmic amplification and micro-targeted content".

In August 2021 Facebook has effectively stalled the Ad Observatory project by suspending Facebook accounts of Cybersecurity for Democracy team members. Lawmakers, regulators, and civil society groups are stepping up to support this project.