The 2016 report by the Centre for Media Pluralism and Media Freedom raises significant concern for media pluralism in the 28 European Union member states under examination and in two candidate states, Montenegro and Turkey 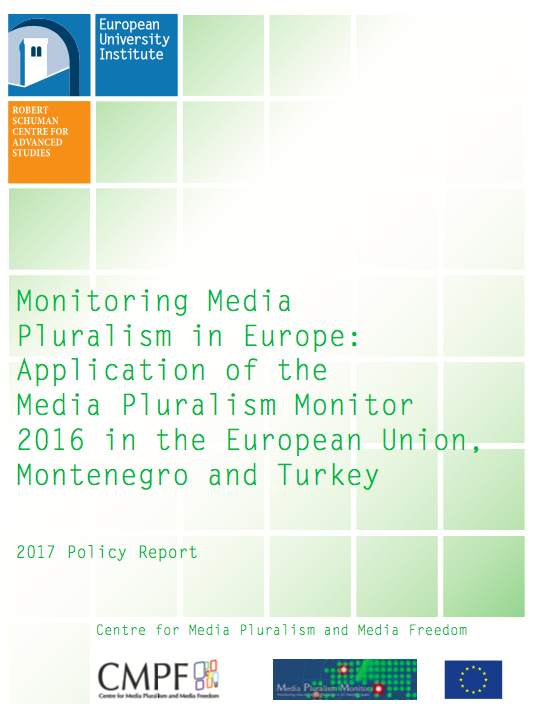 Published after two pilot-projects that were co-funded by the European Union in 2014 and 2015, this report presents results and methodology of the 2016 Media Pluralism Monitor (MPM) implementation in EU-28 member states, plus Montenegro and Turkey (MPM2016). Co-funded by the European Union, the MPM is a tool that has been developed by the Centre for Media Pluralism and Media Freedom (CMPF) at the European University Institute in order to assess the risks to media pluralism in selected countries. The data collected in this research help to better understand the threats to media pluralism in different media contexts and provide useful information for policymakers, researchers, and civil society responsible for implementing advocacy measures, where needed.

The MPM2016 analysis is based on a set of twenty indicators covering a broad notion of media pluralism that encompasses political, cultural, geographical, structural and content related dimensions. All types of media are covered (public service, commercial, community media, new media and online platforms) while the risks for media pluralism are measured in four different areas: Basic Protection, Market Plurality, Political Independence and Social Inclusiveness.

The area of Basic Protection includes the fundamental elements of any plural and democratic society: freedom of expression, right to information, status of journalists, independence and effectiveness of the media authority, internet access. In this area most of the countries considered by the MPM2016 fulfill the basic protection conditions, 11 countries score a medium risk and only one country (Turkey) scores a high risk.

The Market Plurality area assesses the risks to media pluralism that arise from the level of transparency and concentration of media ownership: in this field the vast majority of the countries under consideration score a medium risk (25); 2 countries (Bulgaria and Luxembourg) score a high risk while only 3 countries (Germany, France and Portugal) score a low risk.

The Political Independence area is assessed using indicators that evaluate the extent of the politicisation of the media system. The comparative analysis of the risks reveals that a vast majority of countries scored a medium risk (18), 8 are at low risk (Sweden, France, Germany, Portugal, Belgium, Denmark, the Netherlands, and the United Kingdom), and 4 are at high risk - two of which are EU member states (Hungary and Slovenia), and two candidate countries (Montenegro and Turkey).

Finally, the Social Inclusiveness area examines access to media by minorities as a core element of media pluralism. Within this area two thirds of the countries (21) are in the medium risk band; 3 countries score a high risk (Greece, Latvia and Turkey) and only 6 countries a low risk (Belgium, Denmark, France, Netherlands, Sweden and the United Kingdom). None of the countries scored low risk on the representation of women.

In a nutshell, apart from the worrying Turkish case, in line with MPM2015 and MPM2014 the results of the MPM2016 implementation confirm that no EU country is immune from risks that are related to media freedom and pluralism.