Anti-SLAPP Declaration and Call to Action

At the end of the Anti-SLAPP Conference, the Coalition Against SLAPPs in Europe (Case) launched a declaration and call for action to protect journalists and public watchdogs from SLAPPs 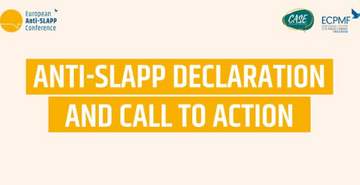 The Coalition Against SLAPPs in Europe invites all governments across Europe to take immediate action to protect journalists and other public watchdogs from the growing threat of strategic lawsuits against public participation.

On the occasion of the first European Anti-SLAPP Conference, the coalition committed to continuing to fight for exposing SLAPPs, building resilience, and advocating for law reforms.

The European Commission’s anti-SLAPP initiative launched in April 2022 is considered by the coalition and its members as a crucial first step forward in tackling the growing problem of abusive litigation. The Council of Europe’s work on drafting a recommendation is also welcomed, together with the September 2022 United Nations Human Rights Council’s Resolution which urges all States to adopt laws and policies related to SLAPPS. Furthermore, some countries have made progress in the introduction of anti-SLAPP provisions.

This declaration calls for governments to deliver concrete and immediate action to work towards the strongest possible set of anti-SLAPP rules. In particular, the document provides a number of recommendations to the European Union, the Council of Europe, the European Parliament, EU Member States and all governments.