Bulgaria: MFRR partners ask the interim government to examine the state of media freedom in the country

Improvement of the situation in Bulgaria needs significant will, as well as a broader recognition of the fundamental role that independent journalism plays for the society. MFRR asks the interim government to prioritise the investigation of threats and attacks against journalists 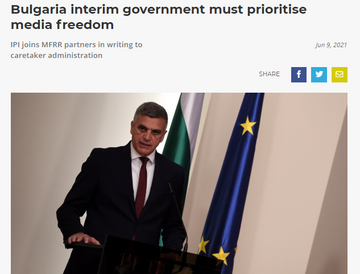 Diana Kovacheva, head of the Ombudsman of the Republic of Bulgaria

The Media Freedom Rapid Response (MFRR) are writing to urge you to take the opportunity presented by the interim government to prioritise the improvement of media freedoms in Bulgaria and the investigation of serious threats and attacks on journalists.

Bulgaria languishes as the lowest ranked European Union member state in Reporters Without Borders’ 2021 World Press Freedom Index. Its continued deterioration over the last year reflects poorly on the former administration and presents substantial challenges for the caretaker government, which assumed office on May 12.

Attacks and threats against journalists remain serious and frequent, with those responsible almost never facing justice; police accountability for violence against media workers has been virtually non-existent; legal harassment of outlets investigating the activities of banks and other powerful institutions is common; and journalists have faced new restrictions on speaking with politicians and accessing information.

Improvement of this situation will require significant political will from the government, public officials, prosecutors, and law enforcement authorities, as well as a broader recognition by Bulgarian authorities of the fundamental role that independent journalism plays in society.

To address these challenges, our organisations request that you commission an immediate independent review to examine the current state of media freedom in the country and to identify key challenges. This should consult both national media, civil society and international stakeholders and be tabled for discussion by the next parliament when it is formed in July as a matter of high priority.

Meanwhile, we further draw your attention to the following violations of media freedom that MFRR has monitored and called on the previous authorities to act upon. We ask you to make resolving these cases a priority for your interim government:

While the issues outlined here are but the tip of the iceberg in the systematic and fundamental issues facing media freedom in Bulgaria, addressing them would be an important start and a welcome signal that media freedom will be given far greater priority during your interim government. While we recognise that legislative changes are currently impossible, we urge you to take these focused recommendations into account. Ahead of the July election, we also ask you to urge all candidates and politicians to ensure the campaign is conducted free of intimidation of media and journalists.

The MFRR looks forward to seeing your response and would be willing to meet with a delegation from the interim administration to discuss these issues and our recommendations further.