Greece: demanding swift investigations on the murder of a journalist

Giorgos Karaivaz was murdered on Friday 9 April in front of his house. The MFRR demands a robust response 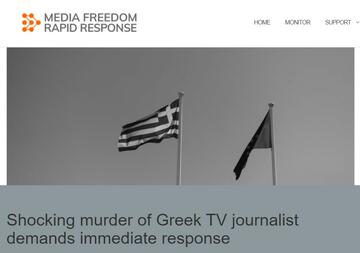 Irene Khan, United Nations Special Rapporteur on the promotion and protection of freedom of opinion and expression

Teresa Ribeiro, OSCE Representative on Freedom of the Media

The Media Freedom Rapid Response is gravely concerned about reports that veteran crime reporter Giorgos Karaivaz was fatally shot outside his home in Athens today in what appears to be a planned attack. We urge you to ensure a swift and thorough investigation that results in all those responsible for the murder being brought to justice.

On 9 April, Karaivaz reportedly returned home from work on a show on Star TV when unidentified assailants ambushed him. He was found dead outside his car, parked beside a small park near his home. At the time of writing, police had launched a search for the suspected perpetrators, who remain at large. Neighbours did not report hearing gunfire, which would suggest the use of a silenced weapon. This and the nature of the attack suggests a coordinated and planned assassination.

The Media Freedom Rapid Response call for a swift and thorough investigation, which examines any links between the assassination and Karaivaz’s journalistic work as a veteran crime reporter and results in all perpetrators, go-betweens and masterminds being brought to justice. Swift and robust action is needed to protect against a culture of impunity taking root and encouraging others to target and attack journalists and media workers.