As part of the MFRR, IPI calls for thorough investigation into brazen daylight attack on Michele Santagata 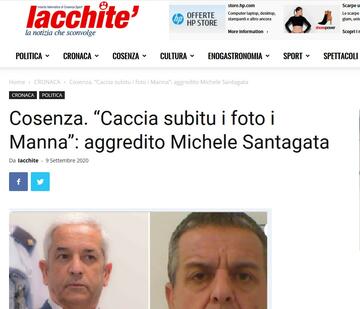 Authorities in Italy must conduct a thorough investigation into the death threats and brutal beating of journalist Michele Santagata in Cosenza and ensure his physical safety is guaranteed, the International Press Institute (IPI) said today.

At around 2.40pm on September 8, Santagata, a journalist and manager at online news outlet Iacchitè, was ambushed in broad daylight in Cosenza city centre by two men who punched and kicked him in front of a crowd of more than a dozen witnesses.

According to the journalist, the pair of unidentified men had been stationed in a car outside the newspaper’s office waiting for him and “violently” attacked him after he left the building.

The attack was broken up by a group of onlookers who intervened. Santagata was taken for medical treatment at the local A&E but suffered only bruises and a minor injury to his knee.

In the days before the assault, Iacchitè had published a series of articles reporting on alleged judicial corruption involving a local mayor and lawyer, Marcello Manna, his client Francesco Patitucci, an alleged boss in the Ndrangheta organized crime group, and a local judge.

During the beating, the journalist said the two attackers threatened him and told him in a local dialect: “Give us immediately the photographs of the lawyer Manna and don’t ever write anything anymore about Patitucci, the next time we’ll cut your head off.”

The newspaper had previously published photos depicting Manna in the office of Marco Petrini, a judge and former president of the Court of Appeal of Catanzaro, the capital of the Calabria region. It is alleged that Petrini received €2500 as a down payment to overturn a first-degree verdict for Manna’s client Patitucci, who was sentenced to 30 years for murder. Manna is currently being investigated by the Salerno Prosecutor’s Office and has been accused of judicial corruption.

Writing about the motive for his attack, Santagata said: “They wanted to hurt me, but they also wanted to make me an exemplary lesson.” He alleged the men who attacked him were working for the Ndrangheta, a powerful Italian Mafia-type organized crime syndicate based in Calabria.

The journalist added that he had managed to record the number plate of the car used for the assailant’s escape and had provided it in an official statement to police, who have opened an investigation.

Footage from video surveillance cameras in the area is currently being examined, according to the National Federation of the Italian Press. A dozen witnesses were present at the time.

“We call on local and national police in Italy to carry out a thorough and transparent investigation into this brutal beating to ensure both those who carried out and ordered the attack are prosecuted”, IPI Deputy Director Scott Griffen said. “With a number plate and more than a dozen witnesses, tracking down those responsible should be achievable for law enforcement.

He added: “In light of the abhorrent death threats against Santagata, it’s also essential he receives appropriate police protection. This attack on a journalist and media outlet in retaliation for their reporting corruption is an attack on Italian democracy itself, one that’s sadly all too common in Italy.”

In an online article in Iacchitè, the newspaper described the attack on its journalist as a “deplorable attack on freedom of the press” and “the irrefutable proof of the veracity of his writings”.

Responding to the incident, Manna, who is the serving mayor of Rende, issued a statement condemning the “cowardly attack” and denouncing any use of violence against journalists. Referring to himself as an “injured party”, he called on investigating bodies to determine why his name had been referenced by the attackers in connection with the alleged crime boss.