Italy: a call in support of Roberto Saviano, defendant in a defamation trial

At the conclusion of the first hearing in the proceedings for aggravated defamation initiated by current Prime Minister Giorgia Meloni against Roberto Saviano in 2021, we express our solidarity with the Italian journalist for his commitment to the public interest 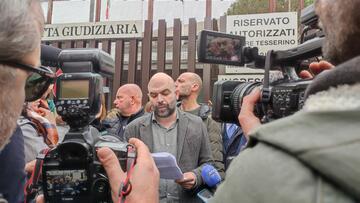 Members of the Coalition Against SLAPPs in Europe (CASE), with the support of the coalition’s Italian group and Media Freedom Rapid Response (MFRR), express solidarity with Roberto Saviano who attended the first hearing in the proceedings for aggravated defamation initiated against him by current Prime Minister Giorgia Meloni. We are seriously concerned about the criminal proceedings initiated in 2021 by the current Prime Minister Giorgia Meloni, the leader of Fratelli d'Italia. Under the current provisions on defamation, Roberto Saviano risks imprisonment for his criticism of Meloni during a TV programme.

Such accusations act as a gag on freedom of expression, a fundamental right enshrined in the Italian Constitution and international law. No journalist or writer should be prosecuted for expressing their honest opinion on issues of public interest. A criminal defamation suit is not an acceptable response in a democracy, all the more so when it comes from a high ranking representative of the institution. This threat to Saviano reveals, once again, the degree of the  abuse of defamation suits or SLAPPs (Strategic Lawsuits Against Public Participation) in Italy.

The lawsuit for aggravated defamation was initiated by current Prime Minister Meloni in November 2021, in response to comments made by Roberto Saviano during the episode of the TV programme Piazza Pulita which aired on 3rd December 2020. Saviano's comment was formulated in response to the controversial rhetoric employed in recent years by the two political leaders to describe the migration emergency in the Mediterranean.

In November 2020, the NGO ship Open Arms rescued a number of displaced individuals from a shipwreck, caused by a collapsing dinghy in the Mediterranean Sea. The delayed rescue by the Italian authorities had prevented timely assistance to the survivors who were in dire need of specialist medical care, including a six-month-old infant who later died on the Open Arms. Following Piazza Pulita’s coverage of the investigation on the authorities’ delayed response, Roberto Saviano had referred to both Meloni, the then leader of Fratelli d'Italia and the Lega secretary, Matteo Salvini as 'bastards'.

Those who express their opinion on matters of public interest should not fear nor be exposed to intimidation, conviction, or imprisonment. On this last point, the Italian Constitutional Court has made its position clear, urging lawmakers to initiate a general reform of the legislation on defamation that would bring Italian legislation in line with the standards of European and international law. With the ruling of 9 June 2020 and the decision of 22 June 2021, the Court, in line with previous judgments of the ECtHR, declared prison sentences in cases of defamation in the press unconstitutional. However, the provision of prison sentences remains in place for cases of ‘exceptional gravity’. In accordance with such provisions, Saviano still faces a custodial sentence because the formal charge is aggravated defamation.

At the conclusion of the first hearing at the Criminal Court of Rome on 15 November 2022, it was decided that the trial will be re-assigned to a new judge and adjourned to 12 December. The current Minister of Infrastructure, Matteo Salvini, has filed a petition to become a civil plaintiff. The Lega leader has also a pending defamation lawsuit initiated against Roberto Saviano in 2018: its first hearing is scheduled for 1 February 2023. Further, on 28 January 2023 another defamation trial instigated by Gennaro Sangiuliano, current Minister of Culture, awaits Roberto Saviano.

At the end of the first hearing in the Meloni case on 15th November, Saviano reiterated the central role that writers play in a democratic society: “My tools are words. I try, with the word, to persuade, to convince, to activate”. Exiting the courtroom, he argued that: "Democracy is based not only on a consensus that can lead to winning the electoral lottery, but exists if dissent and criticism are allowed. Without such premises there is no democratic oxygen”.

The perilous situation in which Roberto Saviano finds himself must also be taken into account. Life under escort, already a cause of marginalisation for journalists, was only necessary due to threats made against Saviano by organised crime and these threats should not be amplified through further threats made by high ranking politicians.

Joining the dissent expressed by Italian and European journalists' associations, the undersigned organisations call on Prime Minister Giorgia Meloni to immediately withdraw the charges against Roberto Saviano. We support the recommendation formulated by Italian and European civil society and international organisations to the new parliament to act against vexatious complaints and to quickly adopt a comprehensive reform of both civil and criminal defamation laws in Italy. Finally, we urge Italy to bring forward legislation to tackle the use of SLAPPs in line with the EU Anti-SLAPP Recommendation of 27 April 2022. The Italian Government is also urged to give its full support to the Anti-SLAPP Directive as proposed by the European Commission.