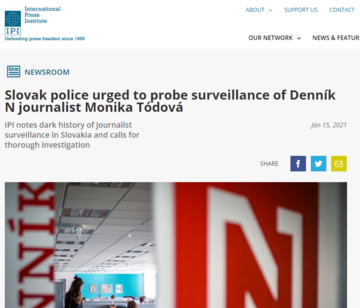 IPI, a global network of editors, media executives and leading journalists for press freedom, warned the surveillance of a prominent Slovak journalist bore alarming echoes of the surveillance campaign that has been linked to the murder of investigative journalist Ján Kuciak in 2018.

Tódová was monitored and photographed by a man in an SUV for at least two days at the beginning of January while she was living with her family in a cottage in the High Tatra Mountains in northern Slovakia. The car remained parked outside the property for eight hours.The journalist was also watched by another unknown man around the same time who was stationed outside the cottage in a car with a Bratislava number plate. The same car was spotted following Tódová after she returned to Bratislava.The suspicious behaviour was reported to the police at the time and one of the men was given a disciplinary fine for breaking curfew.

The Regional Directorate of the Police Force (PZ) confirmed that the department of the High Tatras PZ had launched a criminal procedure for “dangerous surveillance” and was currently analyzing available information.