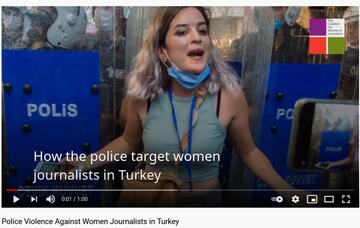 The Coalition For Women In Journalism (CFWIJ) continues to follow the direct targeting of journalists and the disproportionate use of force against women journalists who follow events in the country. We consider the latest events quite alarming and we are deeply concerned about the physical assaults women journalists have suffered.

Since the beginning of 2021, CFWIJ has recorded at least 44 women journalists subjected to police violence in Turkey. Three women journalists' had their houses raided and were detained for their journalistic activities. At least 13 female reporters were detained while following events in the field. Many of them were exposed to verbal harassment by the police at the same time as those cases.

With the directive initiated by the General Directorate of Security (EGM) on April 27, 2021, it became nearly impossible for journalists to do their job. It paved the way for the direct intervention of journalists filming and the social movements they followed.

CFWIJ invites everyone to join our campaign to raise awareness about this issue and to help us support women journalists.

Here the link to the petition.