Under the title "Protecting the safety of journalists, media freedom and pluralism in the European Union: challenges and opportunities", a full day of discussions and meetings will analyze the state of media freedom and safety of journalists, collecting recommendations and stories. On 24 February 2022, from 9:30 to 18:00, the event will be both in-person in Brussels, and online 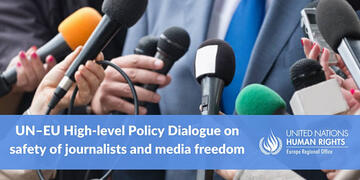 The world today faces critical new and historic challenges to freedom of expression, with journalists and  media facing increasing threats and Europe not being immune to this global trend. In addition to the  tragic murder of five investigative journalists in the EU region over the past five years, journalists have  reported being increasingly targeted by illegal surveillance as well as smear campaigns, Strategic  Lawsuits Against Public Participation (SLAPPs), online hate speech and harassment, especially of  female journalists, as well as violent physical attacks. Those attacks occur in a broader context of  challenges to media independence, including the capture of public service media, market concentration  and undue restrictions to the free flow of information online, which intersect with unprecedented threats  to the economic viability of media outlets. Yet, information is a public good, as endorsed by United  Nations (UN) Member States and referred to by European Commission President Ursula von Der Leyen in her 2021 State of the Union address.

This requires concerted action by all stakeholders to enhance and strengthen the impact of existing and  upcoming measures and mechanisms, including by reinforcing protection networks at global, regional  and national levels. As the European Union is shaping ambitious initiatives in this area, the UN Human  Rights Regional Office for Europe (OHCHR), in cooperation with the United Nations Educational,  Scientific and Cultural Organization (UNESCO), will host a multi-stakeholder policy dialogue on  24 February 2022.

Held as the UN Plan of Action on Safety of Journalists and the Issue of Impunity turns 10 in 2022, the  dialogue will be an opportunity to explore how to strengthen synergy and cooperation on these matters  among EU, UN and other regional stakeholders, bodies and initiatives. It will aim to strengthen EU’s  recent efforts and help ensure alignment with existing UN standards, considering as well that EU policies  may serve as future references at global level. Building on a first exchange of views with civil society  and media representatives hosted by the OHCHR and UNESCO on Human Rights Day 2021, the  dialogue will also consider perspectives shared by stakeholders in response to the call by the UN Special  Rapporteur on the promotion and protection of freedom of opinion and expression for comments on  opportunities, challenges and threats to media in the digital age. The interactive discussions will be  articulated along three main themes: i) how to better protect journalists from threats and attacks, ii) how  to strengthen media freedom and pluralism, and iii) how to address challenges facing traditional media  in the digital information ecosystem, against the background of EU regulatory efforts.

The event, hosted in collaboration with the Belgian Ministry of Foreign Affairs, is organised in the  framework of a dedicated project on the protection of journalists, media freedom and pluralism in the EU, recently undertaken by the Office as part of the Global Drive for Media Freedom and Safety of Journalists programme – a joint programme of OHCHR and UNESCO launched in May 2021 with the support of The Netherlands.

10:00 Protecting the safety of journalists, media freedom and pluralism in the European Union:  challenges and opportunities

- Věra Jourová, Vice-President and Commissioner for Values and Transparency of the  European Commission

- Irene Khan, UN Special Rapporteur on the promotion and protection of the right to freedom  of expression

- Teresa Ribeiro, OSCE Representative on Freedom of the Media, tbc

11:30 Roundtable One - Better protecting journalists against attacks and legal harassment: enhancing  synergies to ensure progress on the ground