Just a few days after a similar call, the International Press Institute (IPI) strongly condems police violence against photojournalists reporting on clashes in the Polish capital Warsaw. The violence led to numerous injuries and the hospitalization of a 74-year-old photographer who was shot in the face with a rubber bullet 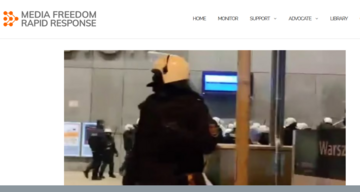 IPI, a global network of editors, media executives and leading journalists for press freedom, said that in each of the attacks the journalists in question had either been wearing “PRESS” signs or were otherwise clearly identifiable as members of the media.
The incidents happened on November 11, 2020 as media covered violent clashes between police and members of far-right and nationalist groups during the annual Independence Day march through the capital.
IPI Deputy Director Scott Griffen said the acts of aggression towards the media were shocking and unacceptable and called on the commander of the Warsaw Police, Paweł Dobrodziej, to ensure a thorough investigation was carried out to identify those responsible.
“While we understand this was a volatile situation for police to handle, nothing excuses the unnecessary and at times brutal violence against photojournalists, all of whom wore PRESS insignia or who clearly and loudly identified themselves as media”, Griffen said. “This suggests that officers knew exactly what they were doing.”

The full text of the statement can be found on IPI website.