In an aswer to a Parliamentary Question submitted by MEPs Viola Von Cramon-Taubadel, David Casa and Stelios Kouloglou, the Vice-President Vera Jourová confirms the Commission's commitment to tackle strategic lawsuits against public participation 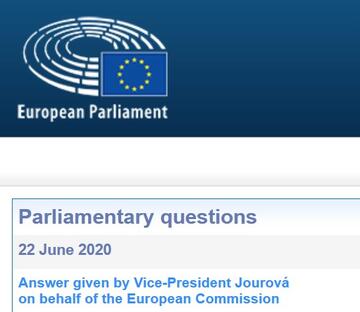 "The Commission shares the concern that Strategic Lawsuits Against Public Participation (SLAPPs) could result in an abuse of defamation laws, with the aim of threatening journalists and other citizens with ruinous law suits": these opening words of the written answer published on June 22nd again stress the importance of freedom of expression and journalism for the present European Commission and for the future action of its Vice-President Vera Jourová, who is in charge of Values and Transparency.

"A plural, free and independent media is essential to a well-functioning democracy. Journalists play a vital role in European democracies and they should be able to operate freely, without threats and intimidation".

The Commission considers that SLAPPs are an issue "which lies at the intersection of private international law, public policy and media freedom", and that they deserve "a thorough analysis".

As happened before, for example recently in the answer to a letter sent by several MEPs who raised the same issue, the Vice-President announces that "the Commission will also present a European Democracy Action Plan by the end of 2020 to help to improve the resilience of our democracies and address the threats of external interference in European elections. The aim will be to counter disinformation and to adapt to evolving threats and manipulations, as well as to support free and independent media".

The issue was officially raised by the Parliamentary question submitted by Viola Von Cramon-Taubadel, David Casa and Stelios Kouloglou: the MEPs asked how the Commission intends to protect all victims of SLAPP, including journalists, activists, academics, trade unions, non-governmental organisations and citizens; stressed that "like whistle-blowers, SLAPP victims are one upstream component of the enforcement of EU law and policies" and therefore asked if the Commission will ensure that, like whistle-blowers, victims of SLAPP are protected by legally binding measures enshrined in EU law, including a directive; the MEPs also asked if a revision of the EU Framework for private international law (Brussels I and Rome II) to end the practice of forum shopping and protect SLAPP victims was planned.

In her answer, Vera Jourová confirms that "relevant private international law rules will be subject to evaluation during this mandate. These evaluations will include the issue of defamation, which is currently excluded from the scope of Rome II Regulation".