The Media at Protests: Official Attitudes

Covering protests and demonstrations is part of the core function of journalism of disseminating public interest information. However, often media workers are subjected to intimidations and attacks, also by police 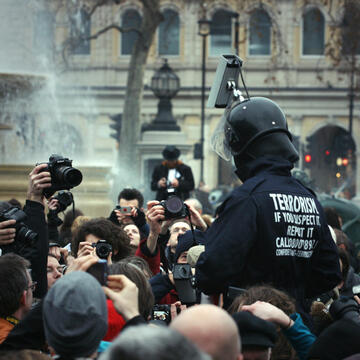 Written by Sofia Verza, PhD candidate at the University of Perugia

In a 2015 survey asking if “media organizations should be able to publish information about large political protests in our country”, 11% of the respondents in Italy, UK and the US, 12% in Germany and 22% in France answered that the government should be able to prevent it.

Covering protests and civil disorders can be risky for journalists. That is why many civil society associations try to make media workers aware of the precautions that should be taken before deciding to cover these kind of situations, such as knowing the area, carrying press accreditation but also being aware of the tactics of the security forces, the weaponry they will use and pre- alerting the editor in case of arrest. The last suggested precautions highlight demonstrations can be dangerous not only in themselves, but also because official authorities can endanger journalists in the course of their work.

Press observers are not always distinguishable from the crowd. Some other times they are and, according to the context, they can become a target as a consequence. That is for example what Oksana Romaniuk, executive director of the Ukraine-based NGO Institute for Mass Information, explained speaking about the 2014 protests in Maidan Square, Kiev. “At first we told journalists to identify themselves with an orange emblem. But we soon realized that Ukrainian police officers were targeting these local journalists and their orange stickers. So we decided to make black and white stickers that read PRESS in English, for journalists to wear on their helmet or jacket. Then police was afraid to shoot because they could be faced with a foreign journalist and they did not want to get into trouble”. However, as the following examples will show, the public order’s forces hostility against journalists is not limited to regions and situations where strong social clashes and political instability take place.

The European Centre for Press and Media Freedom (ECPMF) registered 22 physical assaults against 28 media workers in Germany in the first 8 months and a half of 2018. Twenty-six of these journalists were assaulted around right-wing populist or extreme right-wing gatherings. In this regard, German journalists complained that the police did not adequately protect them from interference by right-wing demonstrators in anti-Muslim rallies. For instance, in Chemnitz, a camera team from the local public broadcaster MDR was assaulted when the journalists requested access to a balcony to film the demonstrations and a reporter from Watson online news portal was physically attacked by protesters attempting to confiscate his camera and microphone, right next to a police tank. Journalists also reported of physical intimidations by the police. In Stuttgart, police have restricted access to demonstrations for them.

In France, police violence against journalists took place- for example- in 2016, during the coverage of the protests against the labour reform law: they were hit by baton and sting ball grenades.

The use of force must be regulated by domestic law, which should set out the circumstances that justify its use (including the need to provide adequate prior warnings) and the level of force acceptable to deal with various threats. Governments should develop a range of responses that enable a differentiated and proportional use of force. The 1979 Resolution on the “Declaration on the Police” adopted by the Parliamentary Assembly of the Council of Europe states that “police officers shall receive clear and precise instructions as to the manner and circumstances in which they may make use of arms”. Similarly, the UN “Basic Principles on the Use of Force and Firearms by Law Enforcement Officials” provides that governments and law-enforcement agencies shall adopt and implement rules and regulations on the topic. In this regard, the European Court of Human Rights (ECtHR) noted  that “unregulated and arbitrary action by State agents is incompatible with effective respect for human rights. This means that, as well as being authorised under national law, policing operations must be sufficiently regulated by it, within the framework of a system of adequate and effective safeguards against arbitrariness and abuse of force.” (Giuliani and Gaggio v. Italy, 2009, para.204-5).

While covering a demonstration, the journalists’ devices (laptop, camera, SD cards) may be confiscated, thus possibly leading to the loss of sensitive information. This is why backing up mobile devices locally and encrypting them is advisable. Wilful attempts to confiscate, damage or break journalists’ equipment in an attempt to silence reporting is a criminal offence and those responsible should be held accountable for it.

In the U.S., citizens have a 1st Amendment right to record public events, plus a 4th Amendment protection against unreasonable searches and seizures. This protection is also strengthen by the 1980 federal Privacy Protection Act, which is also applying to freelancers and citizen journalists. Similarly, under the 14th Amendment on the due process protections, public authorities cannot delete your footage, photographs or posts, or force you to do so.

However, in the US as well as elsewhere, journalists can be arrested under charges of trespassing on private property, obstructing officers, unlawful assembly, participating in a riot, refusing to comply to the officer’s orders. This is the case for Esther Yáñez, reporter of Diario Vice of Canal #0 in Spain, allegedly sanctioned for refusing to show her ID to the police while covering a protest in front of the People’s Party headquarters in Madrid. The 2015 Organic Law Project on the Protection of Citizen Security – also called 'Ley Mordaza'-  heavily hampered the right to protest and to cover protests. One year after its implementation, 6.217 sanctions were processed for disrespecting the police, 18 were imposed for the use of photos of police officers or of objects than can identify them, 3.700 for disobedience or resistance to authorities.

Looking for a regional European framework, we can find it in the European Convention on Human Rights (ECHR), especially considering Art. 10 (freedom of expression), Art. 11 (freedom of peaceful assembly) and Art. 5 (right to liberty and security).

It is worth to remind the ECtHR judgment Butkevich v. Russia (February 2018). The case regards the arrest and conviction of Maksim Aleksandrovich Butkevich, an Ukrainian journalist covering an anti-globalisation protest in July 2006 in St.Petersburg. He was detained for 2 days after being charged of disobeying a lawful order, namely he continued to take pictures even if  he was asked by two officers to cease his “unlawful actions”. The compatibility with Art. 10 ECHR was examined, since the Court agreed Butkevich was acting as a journalist, whilst he was not on a journalistic assignment from any media outlet on the day and was not wearing distinctive clothing or press badges. It was recognized his aim was to collect information and photographic material relating to a public event and to disseminate it via social media.

Moreover, the Court read art. 10 ECHR in light of art. 11 ECHR, according to which the unlawfulness of a peaceful assembly does not justify its dispersal. It also upheld that that gathering information is an essential preparatory step for journalists, in order to obtain first-hand information: the media fulfil an important task in a democratic society, informing on the authorities’ handling of public demonstrations and the containment of disorder. Therefore any attempt to remove journalists from the scene of demonstrations must be subject to “strict scrutiny”.

On the contrary, in the case Pentikäinen v. Finland (2015), the Court found no violation of Art. 10 in the arrest, detention and condemnation of a Finnish photo-journalist who did not comply with the police order to leave the scene of a demonstration and who was not wearing distinctive clothing: according to the ECtHR, such request can be considered “necessary in a democratic society” within the meaning of Article 10. Therefore, the Court considered the role of the press did not matter to exclude certain responsibilities for the journalist. Instead, according to some experts, the ECtHR should highlight the States’ positive obligation to distinguish between journalists and “normal” people at protests.

A fundamental passage of the judgment refers to the obligation of journalist to behave in a “responsible” way, opposing the duty to collect and disseminate information to the duties under criminal law- including obedience to lawful orders by the police:

“Against the background of this conflict of interests, it has to be emphasised that the concept of responsible journalism requires that whenever a journalist – as well as his or her employer – has to make a choice between the two duties and if he or she makes this choice to the detriment of the duty to abide by ordinary criminal law, such journalist has to be aware that he or she assumes the risk of being subject to legal sanctions, including those of a criminal character, by not obeying the lawful orders of, inter alia, the police” (§ 110).

The concept of “responsible journalism” is a controversial concept, which -in the ECtHR case law- subordinates the protection afforded by the Convention to journalists to the fact that they act in good faith in order to provide accurate and reliable information.

An ongoing case to follow is Bryan and Others v. Russia, where two of the applicants are freelance journalists charged with piracy together with Greenpeace activists, after joining their boats during a protest at sea.

Other past ECtHR cases can be found in the 2018 thematic factsheet on Media coverage of protests and demonstrations by the Council of Europe.

With regard to the “responsibility” question, both law enforcement agencies and media workers have the responsibility to act according to a code of conduct. As suggested also by the European Centre for Press and Media Freedom’s managing director Lutz Kinkel, the police should provide better trainings for its officers, for underlining the role of the press and the fact it should not be perceived as an enemy. Moreover, direct actions should be taken when officers overstep the boundaries of these duties. On the other hand, according to the Venice Commission, media workers can comply to their duties by remaining outside the action of the demonstration and clearly identifying themselves as journalists.

Moreover, the freedom to monitor public assemblies should not only be guaranteed to all media professionals but also to others in civil society, such as human rights activists, who might be regarded as performing the role of ‘social watchdogs’, with the aim of contributing to an informed public debate.

Finally, the possibility of establishing a distinction between “professional” journalists and those who are not is a tough topic, especially nowadays, when the role of free-lancers, bloggers and citizen journalists is becoming ever more relevant.