Journalists say that personal attacks both from senior officials and the pro-government press have put a strain on their work. An analysis by Lili Bayer, published by Politico 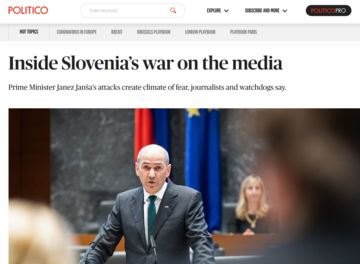 As the Media Freedom Rapid Response has pointed out several times in the last few months, the situation in Slovenia is worsening for media freedom.

"Slovenia’s prime minister, Janez Janša, whose country takes over the Council of the EU’s rotating presidency later this year, has repeatedly and publicly attacked the country’s main public media outlets", points out Lili Bayer in her analysis published by Politico.eu .

POLITICO spoke with over a dozen journalists, including senior staff at Slovenia’s public media outlets. Many of them accuse Janša of whipping up hatred against public media reporters and editors, resulting in threatening phone calls, letters, emails and messages on social media. Journalists say the pressure has led to self-censorship and that some editors have resorted to calling police over threats.

The full article can be found here .